A southwestern Manitoba man’s conviction for abusing an underage girl has spurred a U.S. lawsuit accusing a video chat website of knowingly matching kids with adults on a site that critics say is primarily used for live sexual activity.

Omegle advertises itself as a platform to “talk to strangers,” but critics say it is a safe haven for child sex predators.

When CBC reporters spent time on the site, they discovered that darker reality.

The website and its design are at the heart of a $22-million lawsuit filed by an American woman, known as A.M., who was 11 years old in 2014 when Omegle paired her with a man in his late 30s from Brandon, Man.

The man, now 46, forced her to send naked photos and videos of herself engaging in sexual acts, according to the lawsuit, filed in November in the U.S. District Court in Portland.

“She suffered for three years being at her predator’s beck and call. And he tortured her,” said Carrie Goldberg, of the C.A. Goldberg Law Firm in New York, which represents A.M.

“She lived in constant fear that he was going to come physically and kidnap her.”

The U.S.-based website has a simple design: a person goes on and can type in a keyword to find someone with similar interests or they can leave it blank. They then decide if they want to text or video chat live with a stranger.

It does not require a user to log in with an email or username, and doesn’t ask for an age. Instead, someone is instantly connected with a randomized person identified only as “Stranger.”

To get a better understanding of how the website operates, a CBC reporter spent an hour on the website, identifying herself as a journalist and speaking to Omegle users.

The reporter was paired with this man because they both put the word “Roblox” — an online game popular with children — as a keyword.

The man, who was visibly naked but only showing his chest, stomach and legs, said he was 27.

He told the reporter he is typically naked when online and will “sometimes” get paired with kids.

When asked if he masturbates in front of those kids, he replied, “only if they ask to.”

“If they are comfortable, I am comfortable — it is all about consent.”

Watch | A look at who CBC encountered on the website:

WARNING: This story contains disturbing details about child sex crimes and graphic sexual content. A CBC reporter spent an hour on the website, identifying herself as a journalist and speaking to Omegle users. Critics say the website matches children with adults and is a safe haven for child sex predators.

When the reporter said a child cannot legally consent, he replied, “You’re the one that is calling it legal, I am calling it social consent.”

At least twice the reporter was matched with someone who said they were under 18.

“It’s unfathomable. You can’t even believe that such a site exists,” said Monique St. Germain, general counsel with the Canadian Centre for Child Protection in Winnipeg.

“And yet it does. I think we have to ask ourselves, ‘Why are we letting this happen?'”

When the child protection centre did a search of its 2021 records, it found 170 videos from Omegle being traded on dark web forums, with most of the children appearing to be six to 15 years old.

The dark web is a catch-all term that refers to a series of online networks that are not accessible through traditional search engines. These networks are generally configured to encrypt internet traffic, hide IP addresses and provide anonymity for users, which makes them harder to trace.

“There was a lot more children online for a lot longer,” she said.

Goldberg told CBC News that social media influencers started using Omegle during the pandemic as a new way to connect with their audiences.

“And so there was this entry for kids where it’s like, ‘Oh my God, maybe I’ll get matched with this online influencer or content creator who I’m obsessed with,'” she said.

“But the reality is that they get matched with adults who are naked.”

CBC News searched Canadian court cases and found eight involving Omegle, most of which included the sexual exploitation of children.

The front page of the Omegle site says you must be 18 or older or be 13 or older with parental permission and supervision to use it.

It also flags for parents a website called Connect Safely, which guides parents on how to block certain websites.

It says the video chats are moderated, but does not state anywhere how they’re moderated. Its community guidelines ban nudity, pornography or sexually explicit conduct in its moderated section.

Critics say one of its biggest flaws is there is nothing stopping any user from easily accessing all portions of the website, and because it doesn’t ask for a user’s age, it doesn’t prevent children and adults from matching.

“There’s no age verification and people are randomly paired with other users,” St. Germain said.

“And there’s a high degree of sexual content that is available on that site.”

The lawsuit alleges Omegle is responsible for what happened to A.M. because the website is a flawed product “designed perfectly” to “procure children anonymously and without a trace.”

“[It] profits from procuring children for sexual predators,” the lawsuit says.

Lawyers for A.M. were dealt a victory last month after a Portland judge made a potential landmark ruling in their favour.

Judge Michael Mosman denied Omegle’s motion to have the lawsuit thrown out based on a section of an American law that commonly shields big tech from these sorts of liabilities.

The law — Section 230 of the Communications Decency Act — was created in 1996 to protect companies from being responsible for third-party content on platforms such as online message boards.

When applied today, the law makes it “almost impossible” to hold a company accountable in a situation like A.M.’s, said Naomi Leeds, a lawyer who also represents A.M. in the lawsuit.

Mosman said the $22-million lawsuit is not about the content exchanged between A.M. and the man, but rather the product, which is designed in a way that connects minor children with adults.

In the case in which A.M. was exploited, police executed a search warrant at the home of the Brandon man in 2018. They found thousands of images and videos depicting child sex abuse, including hundreds of pictures and videos of A.M.

The man was criminally charged in 2018 with possessing, accessing and distributing child pornography along with luring via telecommunication. CBC is not naming him to protect the identity of his victims.

He pleaded guilty in the Court of Queen’s Bench in Brandon last year to internet luring and distribution of child pornography and was sentenced in December to 8.5 years, minus time served.

The man was convicted of abusing several underage girls, but it’s not clear if he met them all on Omegle.

A spokesperson for Omegle called the actions of the Brandon man “reprehensible” and said the platform in “no way condones the actions of such users who misuse Omegle’s website.”

“Although Omegle users are solely responsible for their behaviour while using the website, Omegle takes the safety of users seriously,” wrote the unnamed spokesperson in a prepared statement sent by the company’s lawyer, Stacia Lay.

The spokesperson said they disagree with the court’s ruling that Omegle as a product could be held liable and not be shielded under Section 230.

“Those protections have allowed the internet to flourish and permitted the creation of a variety of avenues for free expression.”

Critics warn of dangers of Omegle

WARNING: This story contains disturbing details about child sex crimes and graphic sexual content. A website that matches people with random strangers is in the spotlight after a lawsuit was filed alleging it led to the sexual abuse of a girl by a man from Manitoba.

The company filed a motion to dismiss the lawsuit earlier this week, arguing that Omegle is not a product but a service and should be shielded under Section 230.

When content is flagged as illegal, inappropriate or in violation of Omegle’s policies, the IP address of the user will be banned, the statement said.

In some cases, the spokesperson said, content is reported to law enforcement agencies and the National Center for Missing and Exploited Children in the U.S.

Leeds and Goldberg hope the lawsuit sends a message to social media and tech companies when it comes to protecting children.

“They’re not more powerful than a single individual.… It could take just one person — one person, a teenager — to make them face the consequences for the dangers that their products cause,” Leeds said.

Goldberg hopes for a victory that hits Omegle in its pocketbooks.

“If it’s so big that it takes them out of business, then we don’t care,” she said.

“That’s the cost of doing business for them.”

How to analyze the power usage of websites in Firefox

Sun Aug 28 , 2022
Mozilla launched Firefox 104 recently, and with it a new Developer Tools option to analyze the power usage of websites. The feature is limited to Windows 11 and Apple M1 devices. Power usage of devices has been in the focus for some time, but not on which activities require the […] 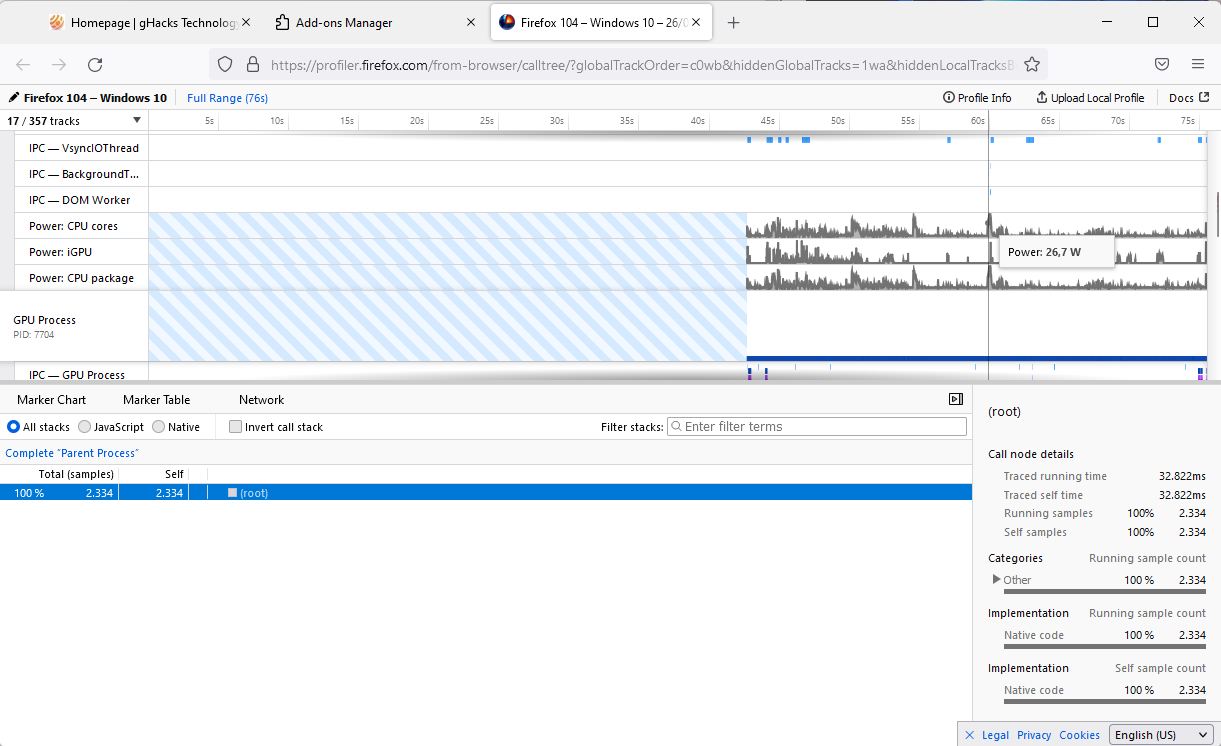