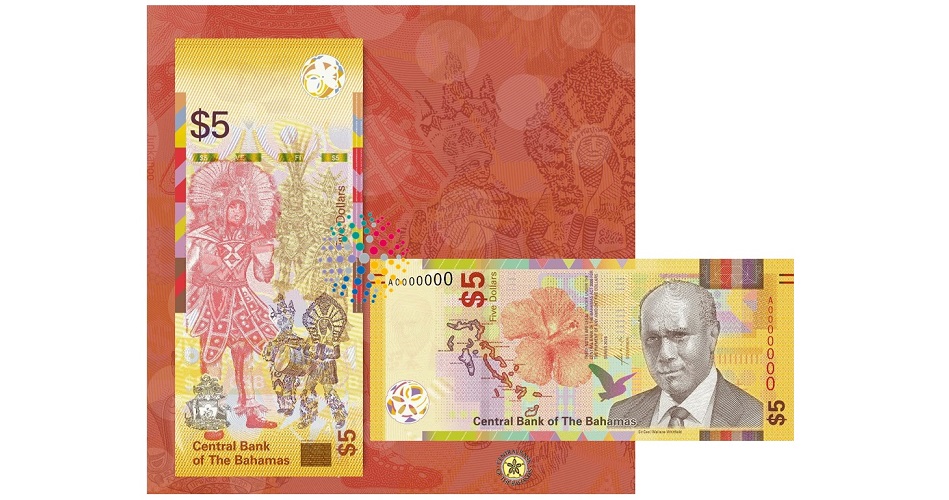 The Central Bank of the Bahamas has released (23rd September) their newest $5 banknote (U.S. $5.00), which is the seventh denomination in their CRISP Evolution family of banknotes. The new note replaces the previous issue released in 2007. The Central Bank’s latest $5 note release combines modern design perspectives with innovative security features to create the new and current banknotes. Part of the new creative perspective is the reverse side which like all other denominations in the new series is designed with a vertical format. This banknote, like the $1 released in 2017 under the CRISP Evolution concept, is printed on durable Hybrid™ substrate, a product developed by banknote and security printers Giesecke + Devrient in Munich, Germany. The product, which is a cross between cotton-based paper and micro-thin polymer film coating that allows the notes to remain in circulation longer with a lesser degree of wear and tear under everyday use than previous banknotes printed on ordinary banknote-quality paper.

The new $5 banknote, which measures 156 millimetres by 67 millimetres, maintains the same dimensions of existing banknotes and is predominantly yellow, with shades of red, lilac, green, and blue. On its face side, the note bears a portrait of the late Sir Cecil Wallace-Whitfield (1930–1990), who continues as the featured statesman from the previous version $5 note as well as an image of a hibiscus in the centre. A former Bahamian government cabinet minister and member of Parliament, Sir Cecil, is regarded as a national hero and the founder of the Free National Movement. This political party petitioned for Bahamian independence from Great Britain. Next to the hibiscus is a replica map of the islands of The Bahamas.

The back features a vignette depicting Bahamian artist Delton Barrett’s likeness of a Junkanoo cow-beller in full costume, with accompanying junkanooers adjacent. Junkanoo Carnival is a Bahamian cultural celebration that includes dance, music, spirituality, and a celebration of freedom. Junkanoo was celebrated over the three-day holiday at Christmas time. In its purest form, it was how the Bahamian slave population expressed jubilation in their lives before and after emancipation, a tradition which continues to this day. Just below the cow-beller is the coat of arms of the Commonwealth of The Bahamas along with the words Central Bank of The Bahamas.

Watermark: Located to the upper-left, the image of Sir Cecil Wallace-Whitfield, as seen on the banknote, is recreated. The numeral 5 is visible when the banknote is held against a light source and when viewed from the face side.

Holographic segmented security strip: Seen on the back side, a holographic security strip which contains micro-lettering FIVE 5 appears segmented. By moving the note, the strip will appear to colour-shift from green to gold. Hold the note up to a source of light, and the strip appears as a solid line.

Perfectly aligned printing application: The image of an incomplete sand dollar is placed to the lower-left half of the note as viewed from the face side when the note is held up to a light source, the sand dollar is complete — and the same image can be seen on the back side.

Iridescent print: ­There is a subtle, lustrous golden vertical band across the back of the note which includes repeating images of the letters CBB and $5, which is visible when the note’s surface is tilted under a source of light.

The introduction of the CRISP technology (Counterfeit Resistant Integrated Security Product) began on the 3rd August 2005, with the first family of banknotes and the release of the initial denomination, which was the $10 denomination. The second family of banknotes continuing to incorporate the CRISP technology was begun in 2016 with the release of a new $10 banknote. The new $5 denomination is the seventh value to be included as part of the second CRISP series. Presently there are eight denominations currently in circulation in the Bahamas. The current $5 first issued in 2007 remains legal tender until further notice. For additional information on the CRISP Evolution series, the banknotes, and coins in use in the Bahamas, please visit the website of the Central Bank of the Bahamas.

Address To The General Assembly | 22 September 2020

Wed Sep 30 , 2020
Wednesday, 23 September 2020, 6:14 amSpeech: United Nations Secretary-General Excellencies, In a world turned upside down, this General Assembly Hall is among the strangest sights of all. The COVID-19 pandemic has changed our annual meeting beyond recognition. But it has made it more important than ever. In January, I addressed […]