Product information management systems, born before Google Chrome and the whole of Gen Z, are back.

PIM systems began in the 1990s as specialty databases of digitized information used in the production of paper catalogs. Their main function was to house data and maintain version control, so users knew what product images and descriptions were current. Flash forward to now — PIM systems have been reborn for the era of headless commerce in the cloud.

Digital sellers need PIM data repositories at the ready to push the right product data to web, mobile and social channels as customers demand. They also need to be auditable, secure and portable, said Leonard Yampolsky, CIO at Gogotech. His New York based e-commerce operation spins up “factory outlet” sites for major electronic brands, usually managing 80 to 100 of them at a time.

Gogotech is in the midst of revamping its digital operations to address its changing consumer audience, which is growing younger, Yampolsky said. That includes new websites designed for mobile devices, and a more modern user experience.

“In the past, we were dealing with a generation that was typically 45 to 60, 65 or 70 years old,” Yampolsky said. “It was a desktop-based generation; the websites were optimized for desktop experience, and mobile was not a consideration. The next generation of customers expects a significantly different customer experience.”

Gogotech employs a PIM system from Akeneo, which allows customers to offer many variations on the same product and to more easily set up bundles of products that combines into a package deal. While Gogotech put out a PIM RFP and heard back from numerous vendors, the decision came down to Akeneo and Plytix.

Akeneo won out for numerous reasons, including ease of use and integration, as well as a minimum of training needed to use it. That was important to Gogotech because of its global operations extending to India.

Mandatory if you support a large catalog

PIM systems aren’t for all digital sellers. The first group that needs them are companies that sell a lot of different items, said former IDC e-commerce analyst Jordan Jewell, now an analyst-in-residence at VTEX, an e-commerce vendor. Some VTEX customers use third-party PIM systems on their e-commerce sites, while others can get by with the company’s built-in catalog features.

That was the case for Fabory, a Dutch manufacturer of screws and fasteners that sells to manufacturers as well as maintenance and repair customers. Its catalog includes 150,000 items, some of them very similar to one another. His company uses SAP’s PIM system and Innovent FindTuner, which among other things helps refine customer search results returned by Fabory’s Apache Solr instance.

“It might be that one type of product has over 200 or 300 different variants, or even more,” said Richard Rijsterborgh, Fabory senior manager of e-commerce. “So, then it becomes almost a matrix — you can imagine in the paper catalogs that we have many matrices where you could find these products on a horizontal and vertical axis.”

But on the web, the one-page chart in the paper catalog might render as 10 or 12 pages of search results, which is why Fabory uses a PIM system, Solr and FindTuner. But it can’t work without strict product information hygiene, maintained in the PIM system.

The second main group of companies that need PIM systems are Internet-only brands that need to be on many channels, “syndicating” their listings across a broad swath of sites. Such companies find value engaging PIM vendors such as Salsify and Syndigo, which track changes on popular retail marketplace channels, Jewell said. Target, for example, updates its taxonomy on a daily basis, and e-commerce directors — especially those working solo or on small teams — selling on that platform can’t keep up.

Add SEO to that: Target, Walmart and Amazon also change their algorithms on a daily basis, as does Google Shopping. Some PIMs that have the capability to syndicate product listings to those channels bring much value by monitoring that.

“Everything’s moving so fast,” Jewell said. “That’s the biggest challenge and need for a PIM.”

Shopify, Acquia get in the PIM game

Both Shopify and Acquia have new PIM integrations: Acquia rolled out a PIM system that arose from its acquisition of Widen last year, and Shopify invested in Sanity.io, the only content platform the e-commerce tech giant has backed to date.

Sanity.io has tight integrations into Shopify’s Hydrogen — an e-commerce framework — and Oxygen, a  hosting platform. While it’s technically not a PIM system, the API-driven Sanity.io platform can be used to store and update complex product information that is fed into e-commerce payment processing engines on customer-facing sites.

“E-commerce systems usually are very good at handling the transactional side of the experiences brands want to create,” said Markus Schork, head of solutions engineering at Sanity.io. “But often they are lacking the extensibility and a way to enrich content: ISBN numbers for books, other codes, weights and more data for certain products — videos, how-to documents, FAQs — to create more rich experiences.”

Restaurant Brands International (RBI) runs almost 30,000 popular fast-food restaurants, including Popeye’s Louisiana Kitchen, Burger King and Tim Hortons. RBI recently implemented Sanity.io as a PIM system to reconcile and standardize menus across apps, mobile web, physical menus and other channels. The company chose Sanity.io because it helps simplify site setup and can be easily repeated from one RBI brand to the next, said Asher Perlmutter, CTO at RBI.

The e-commerce operations for RBI franchises started from scratch in 2018. That put the company’s restaurants far behind online ordering innovators such as Starbucks and Domino’s, which had integrated with “delivery aggregator” companies — as Perlmutter refers to them — such as DoorDash and Uber Eats. RBI realized it needed to play a very quick game of catch-up before the competitors literally ate its lunch.

The process started with assessing what data points needed to be made consistent across each brand, then normalizing product names across the franchises within those brands — the code a Burger King Whopper is assigned in the point-of-sale system, for example. Then RBI needed to get buy-in from franchisees and internal corporate stakeholders, and build and test technology around it.

Some RBI brands such as Burger King have seen 20% digital order rates, and other RBI chains such as Firehouse Subs do better. None of them are at RBI’s goal of 50% digital orders, but they’re trending toward it as more franchisees buy into the digital ordering, coupon and loyalty programs, Perlmutter said. Three versions of the apps — iOS, Android and mobile web — are now up and running in 10 markets, including the United States, United Kingdom and Switzerland.

Starting from nothing probably helped accelerate the process, Perlmutter said, because there were no legacy web systems from which to migrate. But using Sanity.io as a PIM system was key to quickly launching all those apps, as well as pushing promotions and new menu items through a complex network of restaurants with many different owners.

“When you look at the delivery aggregators needing to be able to see our menu and looking at these agencies that are building websites, everyone wants access to this central information that tells us how to run our business,” Perlmutter said.

Ultimately, cloud infrastructure for enterprise IT is the reason that PIM systems are making a comeback, much like digital asset management (DAM) systems. Both originated in the 1990s. Now, though, instead of storing the content on LANs and WANs, it’s all cloud connected and served on-demand through integrations and automations.

E-commerce has grown more complex since the late 1990s. Static basic web-page generation controlled by one back-end application has been replaced — for a growing number of digital sellers — with a headless setup.

Headless commerce feeds product data from a PIM system into the “heads” users build themselves. These customer-facing heads enable ordering for customers who use desktops and laptops, mobile web, smartphone apps and sometimes even smart speakers and smart TVs. Headless commerce architecture also anticipates new channels that will emerge in the future, because they will just require adding new heads to a company’s current setup.

While all of these technologies were in motion before 2020, the pandemic accelerated the modernization of e-commerce for both technology vendors and their customers, said Ali Hanyaloglu, senior director of product marketing at PIM vendor Akeneo.

“PIM really surged at the beginning of the pandemic in 2020, when commerce businesses were forced to become digital or augment their current business models,” Hanyaloglu said. “By quickly implementing a PIM to remove silos of product information and make people productive and processes more efficient, they were able to pivot how they delivered world-class product experiences — and survive during a sudden global crisis.”

The emergence of multiple digital marketplaces upon which sellers can move their goods also has driven headless commerce in general, and PIM system adoption in particular. Amazon, Walmart, Wish, Etsy, Alibaba and eBay all are examples of large, all-encompassing marketplaces.

The proliferation of such digital selling channels makes modern PIM systems appeal to a different user group than those who bought the original PIM systems, Jewell said, as did Chris Schroeder, director of product management at Widen.

“This has led to the rise of modern cloud-based PIM tools optimized for digital channels — and targeted to a marketing audience,” Schroeder said. “This is in contrast to the older, 1990s PIM tools that were often installed on-prem and targeted to an IT audience.”

But where does that leave companies with customers who still publish paper catalogs?

They, too can benefit from the old-school use of PIM tools to automate the production of those, said Eric van Putten, vice president of marketing at PIM vendor DynamicWeb. Modern PIM systems may provide normalized, current product data for e-commerce operations across digital channels, but they can also support physical paper, too.

“We have customers that spend months creating a catalog every year or every two years,” Putten said. “If you set up the right template, creating that kind of catalog can literally be done in an hour. It’s a huge cost saver.”

Tue Aug 30 , 2022
When Selina Tong was in high school, she didn’t know what she wanted to study at university. Her strongest subjects were math and science, so she debated between business, architecture and engineering.  While she was exposed to the latter field from an early age – her father is an electrical engineer, and her […] 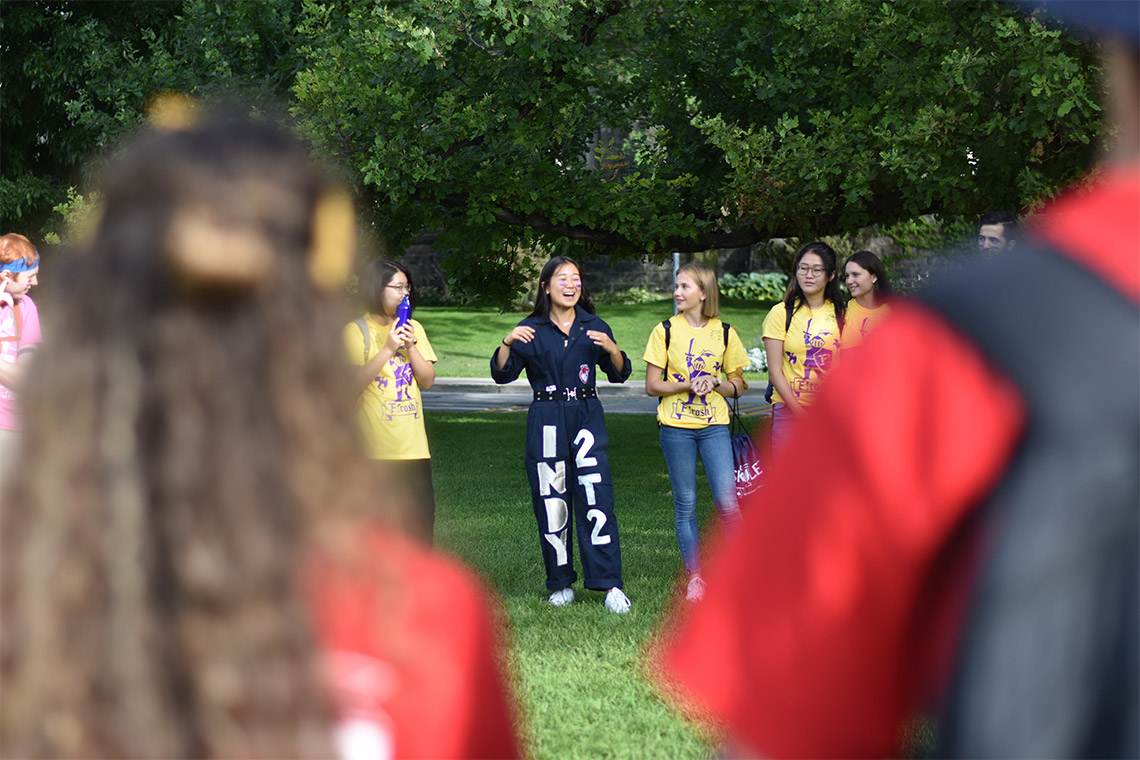