In an ad posted to Twitter on Thursday, Masters sought to portray his opponent, Democratic Sen. Mark Kelly, as the extremist on the issue while describing his own views as “commonsense.”

“Look, I support a ban on very late-term and partial-birth abortion,” he said. “And most Americans agree with that. That would just put us on par with other civilized nations.” (Late-term abortions are extremely rare, according to a Centers for Disease Control and Prevention tracker.)

Just after it released the ad, Masters’ campaign published an overhaul of his website and softened his rhetoric, rewriting or erasing five of his six positions. NBC News took screenshots of the website before and after it was changed. Masters’ website appeared to have been refreshed after NBC News reached out for clarification about his abortion stances.

“I am 100% pro-life,” Masters’ website read as of Thursday morning.

That language is now gone.

Another notable deletion: a line that detailed his support for “a federal personhood law (ideally a Constitutional amendment) that recognizes that unborn babies are human beings that may not be killed.”

The personhood effort is an anti-abortion rights pursuit that would grant the same rights and legal protections to fetuses, in some cases before viability, as any person. The fetal personhood laws would classify abortion as murder and eliminate all or most abortion exceptions in states where the procedure is strictly curtailed, The New York Times reported.

An Arizona law recognizing the personhood of a fetus from the moment of fertilization is blocked in court. In Congress, the personhood bill sponsored by Rep. Jody Hice, R-Ga., called the “Sanctity of Human Life Act,” says, according to its summary, that “each human life begins with fertilization.”

Masters did not outline on his campaign site when in a pregnancy he thought personhood began. His campaign pointed NBC News to his recent comments saying he interprets such a federal law as applying to the third trimester of a pregnancy.

Now the website states he backs “a law or a Constitutional amendment that bans late term (third trimester) abortion and partial-birth abortion at the federal level” and “pro-life legislation, pregnancy centers, and programs that make it easier for pregnant women to support a family and decide to choose life.”

Masters’ backtracking is one of the clearest signs of how much the Supreme Court’s decision to eliminate federal abortion protections is scrambling the political landscape, energizing Democrats both to turn out at higher-than-expected rates in some bellwether contests and to flood their candidates and campaign committees with small-dollar donations.

Masters’ campaign pointed to an interview with The Arizona Republic this month in which he expanded upon his abortion rights views, after he prevailed in a Republican primary that pulled all the conservatives rightward. The campaign did not immediately answer a follow-up question about why the website was updated.

In the interview, Masters, who was endorsed by former President Donald Trump, said he believed a federal “personhood law” would work to ban all abortions in the third trimester, although, as the newspaper reported, he had in February expressed support for banning abortions earlier. Speaking to The Republic, Masters added that Arizona’s soon-to-take-effect ban on abortions after 15 weeks — with exceptions only for the life of the mother — is “reasonable.”

“The federal government should prohibit late-term abortion, third-trimester abortion and partial-birth abortion,” he said. “Below that, states are going to make different decisions that are going to reflect the will of the people in those states, and I think most reasonable. I think that’s what most people certainly in this state and nationwide are looking for.”

In another instance of a language change, Masters’ website included this pledge: “Strip taxpayer funding from Planned Parenthood, all other abortionists, and any organization that promotes abortion.”

Now the sentence no longer mentions “abortionists” — a term coined by abortion rights opponents — nor “any organization that promotes abortion.”

Another promise was eliminated from the website: “Remove funding for any research that uses embryonic stem cells of aborted fetal remains.”

“If Blake Masters thinks that he can quietly delete passages from his website and disguise just how out of touch and dangerous his abortion stance is, he’s in for a rude awakening,” Kelly spokesperson Sarah Guggenheimer said in a statement to NBC News.

Masters is far from the only Republican feeling the impact that abortion politics are having on the midterms. Republican National Committee Chair Ronna McDaniel fretted about the post-Roe Democratic small-dollar advantage in a call to donors that Politico reported Wednesday. Before the Supreme Court’s decision in June, McDaniel also expressed concern about the energizing effect that abortion could have for the left if Roe were overturned, according to two sources who had spoken with her about it in the past and spoke on condition of anonymity to disclose private conversations more freely.

“It’s a big fundraising concern, because we’re seeing a huge boost on the Democrats’ side,” one of the Republican sources said. “We never expected Democrats to sit out. We expected them to put their jerseys on. Now the candidates have to navigate this in the states.”

In Arizona, a once-red Republican bastion that is now a purple swing state, voters opposed the Supreme Court’s decision 52% to 33%, according to a poll this summer from OH Predictive Insights. Only a majority of Republicans were in support, while most independents sided with Democrats in opposition.

Chuck Coughlin, an Arizona Republican pollster, said he just wrapped up a survey of voters that suggests Masters is trailing Kelly by 10 points. A recent Fox News survey found Kelly up by 8 points, too.

“Abortion is a devastating issue for Republican candidates,” Coughlin said. “There are three constituencies who don’t like the Republican position: women, independents and voters over 64 — who are just tired of all the change and chaos and want to go back.

“What Mr. Masters is discovering is there no such thing as political startups,” he added of the venture capitalist, whom tech mogul Peter Thiel has spent millions backing. “You can’t make it up as you go along.”

Masters won his primary this month and has taken to tying Kelly closely to President Joe Biden in hope of undercutting his image as a moderate. Kelly’s campaign has labeled Masters “dangerous.”

Kelly’s campaign holds a significant edge in fundraising over Masters, who emerged from a bruising primary.

Masters has taken aim at Kelly for voting for the Women’s Health Protection Act, which failed in the Senate this summer. The legislation would have prohibited states from banning and criminalizing abortion at any stage when a woman’s health was at risk, a determination that would need the approval of a health care provider, such as a doctor, a nurse or a physician assistant.

'It's Your House Not His'

Sat Aug 27 , 2022
A teenager has been praised for turning the tables on his stepdad after insisting he pays rent to live in the house he inherited from his late father. The request represented the culmination of a remarkable turnaround for the teen who had previously been told by his mom’s new partner […] 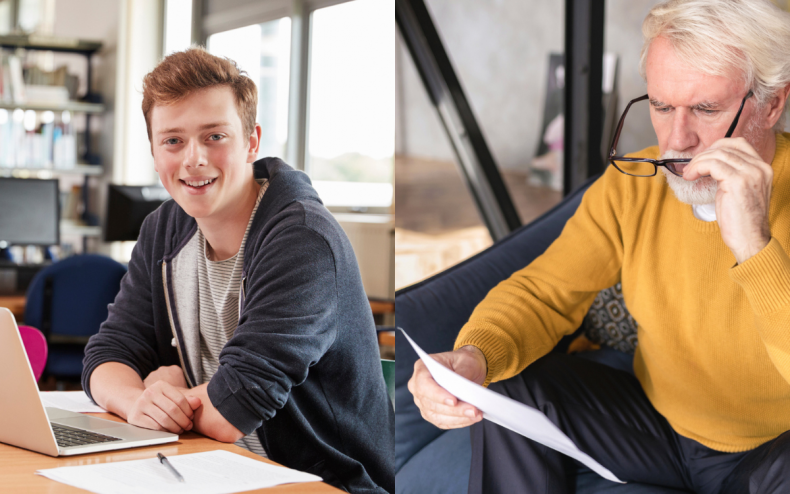