In a socially distanced ceremony at a Delaware high school this week, presidential hopeful Joe Biden introduced Senator Kamala Harris as his running mate in the 2020 election. Like Barack Obama, Hillary Clinton, and Biden’s own campaign staff, Harris has a long relationship with Silicon Valley that includes fundraisers and soliciting advice from tech leaders and employees. Her rise in political prominence in the San Francisco Bay Area coincides with the exponential growth of the tech industry and major companies that call California home — including Apple, Facebook, and Google.

While this isn’t intended as a comprehensive list, we wanted to look back at some key moments in Kamala Harris’ history with Silicon Valley.

After two terms as district attorney of San Francisco, Harris ran for the U.S. Senate in 2010. One of her main opponents in the Democratic primary was former Facebook chief privacy officer and top lawyer Chris Kelly.

Kelly funded his campaign with millions from his personal fortune, and Harris publicly questioned whether electing the former Facebook executive would be like getting a fox to guard a henhouse. “If Kelly couldn’t stand up to Facebook CEO Mark Zuckerberg on behalf of Facebook users, how on Earth can Californians trust Kelly to go to bat on their behalf as attorney general?” she asked.

Kelly appeared to toughen his stance on Facebook privacy issues, joining MoveOn in urging Facebook to only share information approved by users. But with days to go in the primary, Facebook CEO Mark Zuckerberg may have helped tilt the scale in Harris’ favor, according to the San Francisco Chronicle, by indicating that he might attend an event to make calls for the Harris campaign. In the end, Harris won the election and Kelly came in second, according to Ballotpedia.

Weeks before the 2010 general election, Harris visited Google headquarters in Mountain View for an hour-long conversation with company employees led by then Google chief legal counsel David Drummond. She talked about having “a certain bravado about being a California kid” and how the California attorney general should be a go-to person for anyone handling cases against tech companies in the country.

She made it clear in her remarks that she didn’t want to stand in the way of innovation.

It’s instructive to hear Harris share her thoughts on how tech can make government more efficient and to be reminded that antitrust competition law conversations were happening at Google a decade ago.

“This is what I meant earlier about my pride about being in California, where you know this is a short drive to come here. This is [my] backyard — we’re family — so California AGs should be a leader on these issues,” she said.

In that same meeting, she discussed her view of taking antitrust actions against the big companies. This was long before the U.S. Justice Department, Congress, and attorneys general from virtually every state in the U.S. filed antitrust investigations into Google, although European Union officials filed three antitrust cases against Google in November 2010.

In the context of antitrust law, she talked about tech being essential to California’s economy. It’s worth noting that Harris was running while the state was in the midst of a major budgetary crisis. In order to address this economic crunch, she said, “We’re going to have to recognize we cannot stand in the way of business growth and development and that we don’t have to accept false choices. That doesn’t have to be to the exclusion of helping consumers. It doesn’t have to be at the exclusion of going after bad businesses because bad business is not good for good business.”

During her first year as attorney general, Harris signed a memorandum of understanding (MOU) giving the Los Angeles Police Department access to data for predictive policing. The use of data-driven approaches in decision-making is at the heart of Harris’ focus in her book Smart on Crime. But since then, predictive policing systems deployed in cities like Los Angeles and New Orleans with help from companies like Palantir have been accused of demonstrating racial bias or use of racially biased data.

While AI capabilities and the sheer volume of available data have grown dramatically since 2011, Harris’ history as a prosecutor and on issues like predictive policing may return in the run-up to the election. Those issues could also be central to ongoing discussions around racial justice reform and calls to defund the police.

In a very different kind of deal, in 2012 Harris brokered an agreement between six of the largest tech companies with app stores at the time: Apple, Google, Hewlett-Packard, Amazon, Microsoft, and Research in Motion. Terms of the deal included companies designating an area for developers and businesses to share their privacy policies. The deal was reached in part to bring businesses in line with the California Online Privacy Protection Act, a law that required commercial businesses operating online to post a privacy policy. This agreement was reached at a time when several companies — including Facebook, Instagram, and Twitter — were found to be hoovering up user information, like address book contacts, sometimes without permission.

“Your personal privacy should not be the cost of using mobile apps, but all too often it is,” Harris said at the time.

App marketplace regulation is still an issue today. Apple’s App Store dominance was a central topic of discussion in antitrust hearings in Congress last month and made headlines last week when Epic Games filed a lawsuit after being kicked out of Apple and Google’s app stores for iOS and Android, respectively.

In February 2015, about a month after the launch of her U.S. Senate campaign, Harris spoke at Facebook’s headquarters in Menlo Park, California alongside COO Sheryl Sandberg as part of the Safer Internet Day conference. Harris and Sandberg spoke with kids about online harassment and ways to combat cyberbullying. The event itself wasn’t a political earthquake, but it produced memorable visuals of Harris and Sandberg together in the days before Cambridge Analytica, election interference, and boycotts against the company’s willingness to profit from hate. 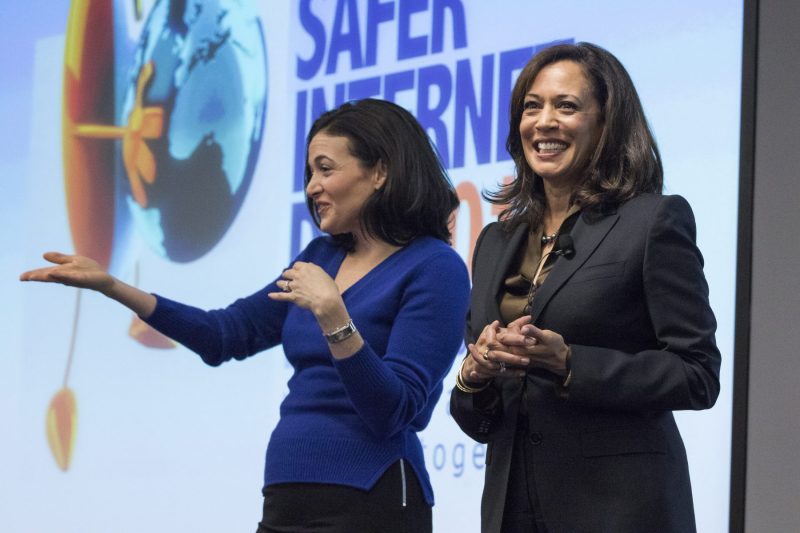 Shortly after the meeting, many major platforms began taking steps to restrict the sharing of explicit content without consent, and Harris launched a public campaign and resource for cyber exploitation victims with input on how to address instances of cyber exploitation on Facebook, Google, Microsoft, Pinterest, and Twitter.

Backpage.com prosecution and Section 230 of the Communications Decency Act

Weeks before the 2016 general election, as Harris campaigned to represent California in the U.S. Senate, Harris filed charges against Backpage founder Carl Ferrer for pimping, pimping a minor, and conspiracy to commit pimping. Ferrer’s charges hinged on the profits his online ad company made off listings for “escort services” and accused him of essentially operating an online brothel. He was arrested in Houston, Texas and extradited to California to face charges. This was part of Harris’ continued effort to address the way online platforms enable human trafficking. Like many other businesses, including big tech companies, Ferrer claimed protection from prosecution under Section 230 of the Communications Decency Act, which provides some liability protection to the creators of an interactive computer service.

The Ferrer case was thrown out shortly after the election. He was convicted of other charges in 2018, but calls for reform of Section 230 for major tech companies came long before Harris charged Backpage and are likely to persist in 2020 and beyond.

Harris, Uber, and the gig economy

Shortly before leaving her position as attorney general, in December 2016 Harris ordered Uber to take its self-driving cars off the streets of San Francisco over safety concerns and stated that she would seek a court order to force compliance if need be. Harris’ brother-in-law Tony West is chief legal counsel at Uber and served as a cochair of the Harris 2016 U.S. Senate transition team and as an advisor to Harris when she was district attorney.

More recently, lawmakers have fielded demands for gig economy companies like Uber to treat workers as employees or contractors, which would confer labor protections and employee benefits. In 2019, California lawmakers offered supporters a preliminary victory in the form of Bill AB 5, which Harris supports. This week, a California judge ordered Uber and Lyft to begin complying with AB 5, though the companies have challenged the measure. Proposition 22 will put the final decision to California voters in November. If Prop 22 passes, calls for similar legislation may grow in Washington, D.C.

In the weeks after multiple news outlets reported that the data of 87 million Facebook users was misused by Cambridge Analytica, in 2018 Facebook CEO Mark Zuckerberg came to Congress to discuss data privacy. As part of a hearing, Harris asked Zuckerberg why Facebook leadership chose not to tell its users when the news came to light in December 2015.

“In retrospect, that was a mistake, and knowing what we know now we should’ve handled a lot of things differently,” Zuckerberg said.

In addition to attracting attention for her questions to Zuckerberg, Harris garnered a reputation for her direct questioning of Attorney General Jeff Sessions and Supreme Court justice Brett Kavanaugh during their respective hearings.

As a U.S. senator, Harris cosponsored legislation to spearhead the development of a national AI strategy in 2018. The AI in Government Act sought to provide a framework for bringing more AI expertise into government and urged federal agencies to actively remove barriers to incorporating AI. While the legislation didn’t pass, members of Congress and the Pentagon have called the formation of a coherent national AI strategy imperative to maintaining economic and military dominance.

While Harris supports the integration of AI in government, she has a history of opposing the algorithmic bias plaguing many AI systems today. In 2018, she joined a group of U.S. Senators who questioned the FBI, FTC, and Equal Employment Opportunity Commission (EEOC) about their use of facial recognition technology. Harris also joined colleagues in Congress in calling for a review of facial recognition use in federal housing in 2019.

In numerous interviews during her bid for the presidential nomination, Harris hesitated to say that tech giants should be broken up. Speaking with the New York Times, she said her first priority if elected would be to ensure U.S. consumers feel their privacy is not compromised. In an early 2019 interview with CNN’s Jake Tapper, Harris said breaking up Facebook is something that should be carefully considered, and that the company had in effect become an unregulated utility. She did not go as far as Senator Elizabeth Warren, whose stance on breaking up tech giants became a cornerstone of her presidential campaign platform.

Harris was also attorney general when Facebook acquired Instagram and WhatsApp in 2012 and 2014, respectively — acquisitions that have come up in the ongoing Congressional antitrust investigation.

A look at Kamala Harris’ record demonstrates that long before she became a nationally prominent politician or vice presidential candidate, Harris played an influential role in shaping tech policy over the past decade. She may very well be one of the most tech-savvy candidates to grace a presidential ticket to date.

If Biden and Harris are elected, their administration is likely to face a range of tech-related challenges — from the growth of 5G and tech nationalism to the proliferation of artificial intelligence and cybersecurity.

Like the deal Joe Biden struck with Barack Obama before agreeing to be his running mate, Biden recently said he wants Harris to be the last person in the room when there’s a tough decision to make. If they make it to the White House, Harris could have a considerable amount of influence on the major tech policy issues facing this country.