SOUTH BEND, Ind. (AP) — One recent night, Ashley Swanson and his wife wanted to order takeout from a local restaurant. The couple were deciding where to go and what to eat, and they wondered what coronavirus safety precautions each establishment had.

More and more customers are choosing where to eat based on how a business approaches COVID-19. Restaurant owners across Michiana are moving at different speeds and making a variety of decisions on how to navigate the state’s guidelines, sanitation and social distancing protocols, as well as customer and employee preferences.

“In that conversation (with my wife), we said it would be great if we could just find one place with that information,” Swanson said. “And I thought what if I could create that as a resource for people?”

Swanson, a South Bend-based web developer, created the website CovidRestaurantReviews.com , which allows consumers to review restaurants based on their approach to COVID-19 safety precautions.

The site is styled similarly to other consumer-based review websites, such as Yelp, and allows contributors to rate restaurants on a five-star scale in three different categories — employees’ use of face masks, social distancing practices, and how readily available hand sanitizer is. There is also space to leave comments and put context behind ratings.

“If a restaurant isn’t trying to be cautious in this very distinct time, I think it’s fair to know about that,” Swanson said. “Then there are the restaurant owners that are going really far and I think the opposite should be true, where people should be rewarding them and going to their establishments as a result, because they are putting a lot on the line to help people.”

The website was launched about a month ago and, because it’s so new, not many reviews have been submitted yet. Swanson said last week there had been 53 rating submissions but says that number is increasing as time goes on.

“I keep tweaking (the site) and adding new features but at the end of the day, it’s only as good as the number of reviews that we get on the site,” he said. “The more reviews, the more refined and trustworthy it can be.”

Anyone can leave a review, but Swanson said he doesn’t want the site to become a toxic “gotcha” place where people can easily criticize without accountability. He plans to examine how people use the site and if he notices abuses (for example, if there are unfounded claims for or against a business), he may establish user profiles, where reviewers log in to participate. Swanson also said he would give restaurant owners the opportunity to reply to any particularly egregious claim.

Restaurateurs often have mixed feelings about review sites. Downtown South Bend restaurant LaSalle Grill owner Mark McDonnell said he views the site as “unnecessary,” saying it may give too much power to keyboard critics. Lauber Kitchen & Bar manager Gabe Torok said he isn’t worried about the site because he is confident in the protocols put in place and welcomes the feedback.

Swanson said he understands the hesitation from restaurant owners, saying it’s never easy to take any level of criticism. He also said that in talking with other people about the site, he started to notice how each person views the resource differently.

“Some people are using words like ‘accountable’ and others are saying it ‘promotes,’ so it’s funny the different angles people have coming to a resource like this,” Swanson said. “But I think I want it to be a balance of the two.”

Tue Aug 18 , 2020
Jamie Mulgrew, Robbie McDaid and Eoin Bradley will be in European action with their respective clubs this week The European club matches involving Linfield, Glentoran and Coleraine are to be broadcast live on the BBC Sport NI website and app this week. The first game to be streamed will be […] 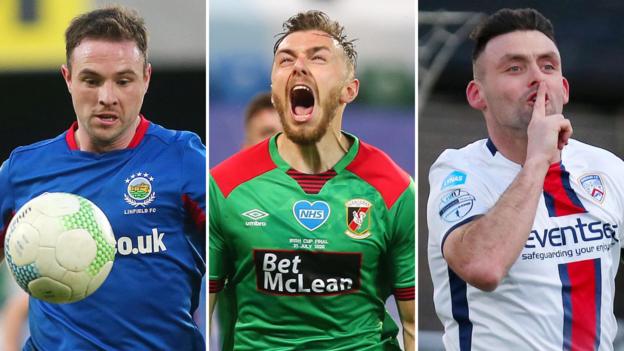